The New Year celebrations here in Ecuador include 3 days of mischievous hijinks leading up to the 1st. Some of you Catholics out there may know of the “Massacre of the Innocents” feast days. The king Herod heard about this baby king of the Jews upstart in Bethlehem, and when the magi double crossed him and didn’t give the baby Jesus, he went on a rampage and killed every kid in town under the age of 2. So goes the story…

To mark the date, kids here dress up as red devils carrying spears with bells jangling from their ankles, and run around poking people and demanding your pocket change. I suppose it’s to represent the angry murdered children. Think of Halloween, but all the kids are dressed as demons, they attack you in the streets and restaurants instead of at your home, and take your money instead of candy. But after dark, things go a little differently. 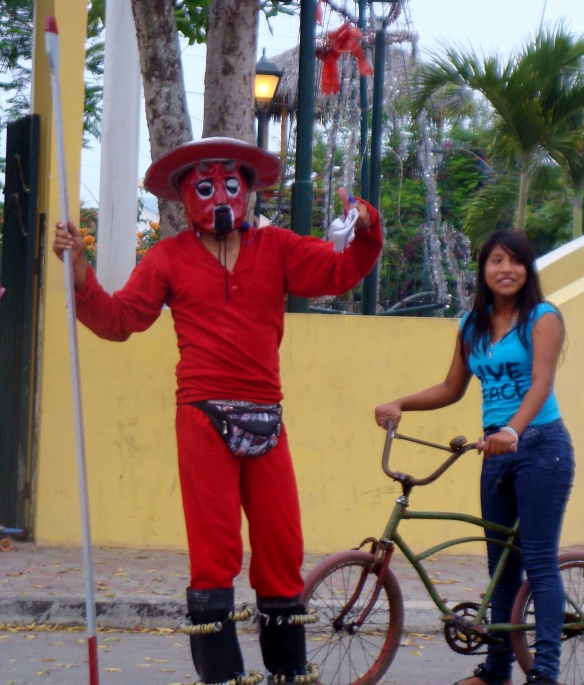 Somewhere along the line, this tradition seems to have evolved into something more bizarre. At night the grown, adult, and usually pretty machismo men, have started dressing in full drag and flitting around in the streets like the Monty Python boys, demanding coins off of any non-drag men they find. They’re called the mogigas (mo-HEE-gahs). Pretty interesting when you think about it. Men from a culture with relatively strict gender roles allow themselves 3 nights to play out a ridiculous female stereotype: they dress like hoes or old women, talk in an obnoxious whine, and demand money from men. But social commentary aside, it is great fun. Everyone and their grandma goes out to watch their fathers, sons, uncles, and brothers make a fools of themselves. A perfect combination of hilarious and creepy. What better way to celebrate the biblical murders of little children then a drag party?

This year Manglaralto has taken it to the next level. More guys have participated this year than before, and they arranged a dance-off competition in the streets between groups of mogigas. I decided I didn’t want to be left out of the fun this year, so couple other ladies and I dressed in drag as well and went as men.

I don’t know if this says about progress in terms of homophobia or gender delineations or general open mindedness in semi-rural Ecuador, but regardless it was a great time. But really, what drag party isn’t?

Enjoy the video, and I apologize if you get a headache from the horrible quality.

3 thoughts on “The Drag Queens of Manglaralto”